An emotional morning at North Kensington Library with the Grenfell Quilt team, on Tuesday.

A few months ago, Eddie Nestor from BBC Radio London issued a call to action on Twitter: the Grenfell Quilt team needed a new home for the weekly sessions and to store their resources.

I thought, why not ask RBKC libraries – in the part of London where I grew up. The answer was yes! The Grenfell team found a new home at North Kensington Library. It was a perfect match and a great use of library space; as a storyteller, I love this! 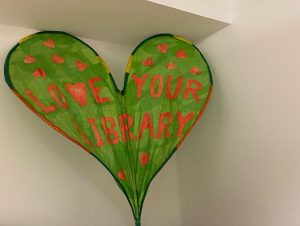 My grandmother, who I based JoJo and Gran Gran on, was a seamstress and would have loved this community project. 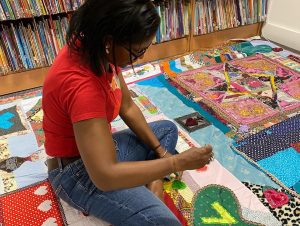 I also reached out to John Lewis at Westfield in Shepherds Bush and asked if they were able to donate any items from their Haberdashery Department. It was a yes from them too, in particular from Olivia, the marketing & events/community liaison coordinator! The Grenfell Quilt team received a few goodies and so thank you John Lewis and Olivia. 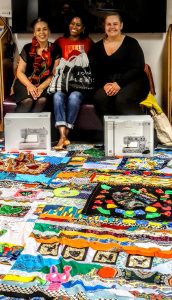 I note also that it is Mental Health Awareness Week, and the weekly sewing sessions are a great way of bringing the community together, to talk and sew together. If you are in W10 on a Tuesday morning, why not pop in?

Eddie interviewed me on his show and here’s a clip of the interview, including a discussion on the Grenfell inquiry.

Look out for my author reading sessions in a few weeks at North Kensington and Kensal Libraries:

Tuesday 31st May, times to be confirmed.